"This is Shooter's Tour" 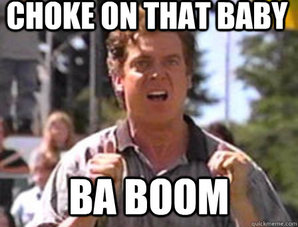 The Shooter McGavin Golf Classic is a two day tournament that matches Team Europe against Team USA in a Ryder Cup style shootout.  The winning team gets to take home The Shooter Cup.  It's a magnificent piece of hardware that could only be found at your local thrift store.  The captain of the winning team must display the Cup for an entire year, after which time, it will be passed on the new winning captain.
September 2014 - Shooter Cup VI - The 2014 edition of the Shooter Cup was a back and forth battle.  For the first time, the cup would be decided in a never before seen 3rd round.  Day 1 was played at Sandpiper Bay and Team Raleigh Captain, Dan Merritt, led his team to an early 6 to 3 lead.  Day 2 saw Team Rest of World Captain, Jeff Casterline, bring his team back in a major way and the ROW team took a commanding 10.5 to 7.5 lead into the final round. The Cup would have to be decided on the final day during individual matchups.  Team Raleigh would capture 4 of the final 6 matches and lock up the Cup 19.5 to 16.5.  The Cup, and bragging rights, will stay with Team Raleigh until Shooter Cup VII in the fall.  Brad Tomlin secured his first Gold Jacket, putting the way the competition with a Shooter Cup record 75 on the 2nd day.  Jeff Casterline (aka The Sandbagger) would go on to win his 2nd consecutive Da Tweed Jacket.